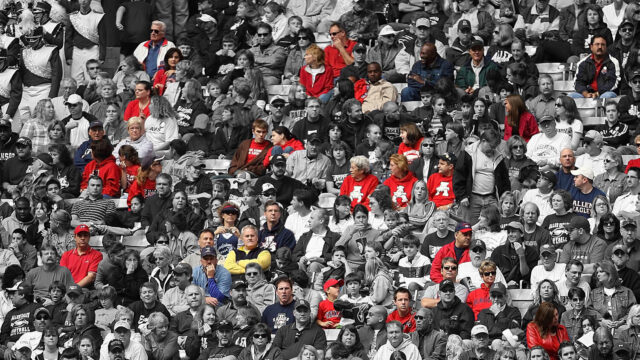 The title of this article may be jarring and is likely a bit polarizing. It’s well-known that sports organizations connect with millions of fans, across countless channels. Not many companies can inspire, engage, and bring together communities around the world quite like sports does. However, is the average sports team ticket base as expansive and diverse as their overall fan universe? The answer is no.

Having a large, global, and loyal fan base provides many benefits for marketing, digital, and sponsorship departments such as increased engagement in brand awareness, off-the-charts broadcast deals, and coveted sponsor value. However, the data shows that sports franchises have only been monetizing a fraction of their overall fanbase when it comes to actual bums in seats. In fact, on average, barely 10% of a major league team’s fan base or universe actually attends or spends money on tickets in a given year. That’s a small percentage considering major league teams have an average of 1,500,000 fans in their known universe, which doesn’t include anonymous social followers or unknown web traffic. Minor league teams fare better at 24%, but that’s to be expected as minor league fans are more regionalized according to geographical data. Overall, the sports industry* monetizes on average only 17% of their fan universe into ticket buyers.

The understanding that sports franchises only monetize a small number of their overall fanbase drives home how important campaign segmentation is. Many times, teams treat their email engagement touchpoints as an opportunity to try and connect with as many people in their database as possible, all at once. They also treat their paid campaigns as another opportunity to reach as many people as they can who may not be in their database already. Both of these actions generally stem from a fear of missing out on a potential ticket buyer – an outlier who doesn’t seem like a good prospect but if the stars align, we think they might have a chance of converting them if they see an email or an ad from us. While the logic does make sense at a very high level, data shows that targeted and personalized content to a smaller group of fans actually increases conversion rates while minimizing saturation and engagement loss.

What’s interesting when you look at the data across leagues, teams, and tournaments is how much messaging is solely about ticket sales. With today’s realities and the ability to even sell tickets being unknown for many teams, it’s important to recognize these previous patterns and work to change them. Most importantly, organizations need to recognize that there are opportunities to better nurture and convert fans in other ways. This awareness shift will enable sports & entertainment organizations to identify other revenue growth opportunities, work to identify the content that drives engagement for different fans (there’s a strong sponsorship use case for this one especially), and ultimately improve how they nurture and grow fan engagement over time.

Across leagues, the numbers are similar. A team’s ticketing customer base is generally much smaller than is assumed. In fact, although an organization’s top spenders (those with a lifetime monetary value over $1,000) represent only a fraction of their purchasers (on average 50,000 fans ), they account for approximately 72% of overall revenue from ticket sales and e-commerce.

Check out the infographic for some overall averages across major league sports.

As sports franchises strategize and plan for fans to return to stadiums, arenas, and ballparks it’s important to recognize that there is only a subset of fans who are likely to purchase tickets, and of that subset, not all of those fans will feel comfortable returning to venues right away. As front offices continue to operate with fewer resources especially within sales departments, the ability to segment and prioritize sales-specific efforts will benefit them even more.

For digital and sponsorship teams, the opportunity lies in continuing to learn about their team’s entire fan universe in order to drive engagement, sponsorship value and other digital revenue streams. By identifying what you know about your fans, which ones are more inclined to purchase tickets, and which ones may never truly consider purchasing tickets, you can formulate your engagement strategy to align with these different segments.

*includes major and minor league sports teams and major tennis tournaments across the United States of America and Canada; does not include secondary market buyers

The How: Things to Think About When Planning Win-Back Campaigns

When planning campaigns around welcoming fans back to venues in any capacity – limited or not – we suggest you consider some of the following:

Who’s already bought: Look at those 4% of your customers whom you’ve monetized in the past and prioritize them in your outreaches. Add some additional segmentation to your lists to determine who’s a repeat buyer. You can read more about recapturing single game buyers here.
Look at your secondary market. Don’t assume your secondary market buyers are content to stay there. Be active about trying to move more of those secondary buyers to primary market sales.
Geography matters. We can’t tell you how often we’ve seen outreaches from sales reps to ‘leads’ who don’t even live in the same state, province, or country as the team. While there are some markets and some leagues who do see higher rates of travelling fans, it’s more likely that your fans who are most likely to purchase a package live within a reasonable driving distance.
Find look-alikes. Take a look at the fans who’ve purchased in the past and look for similar attributes across non-ticket buyers. Pro tip: Machine-learning can make this a whole lot easier and less manual while keeping your head from exploding. Read more about its benefits here.
Use engagement data. Are fan behaviors changing over time. Swift increases or decreases in engagement are usually good predictors of buying behavior. Nurturing ticket page visitors and cart abandoners are other good places that automation can help you identify and convert the right fans.
Listen to your surveys. Instead of guessing if fans are ready to return to live events, ask them. Many teams have been running sentiment surveys throughout the pandemic to map how fans feel about returning to venues and how those feelings are changing over time.
Segment and target your post game emails when the time comes. When fans can finally cheer for their favorite team live again, it’s going to be important to connect with them right after the game. Email is one of the most cost-effective channels to connect with customers because it can be delivered quickly and to the masses while still being personalized. In a new reality where resources may be even more constrained, use this method as a way to connect directly with different segments. Get more tips on post game emails in our dedicated blog.
Test, learn and don’t give up. If you take baby steps with even a few of the above you will start to see engagement and conversion rates grow, all while improving knowledge of your fan universe. Attribution tools can consolidate learning across your marketing channels to make this much easier and faster. Lastly, don’t give up on those that aren’t buying tickets. This will continue to be a majority of your overall audience so find ways to actively nurture their engagement, learn more about them, and convert them through existing and new non-ticketing products…our industry depends on it!